How is Augmented Reality changing the game across all the industries? 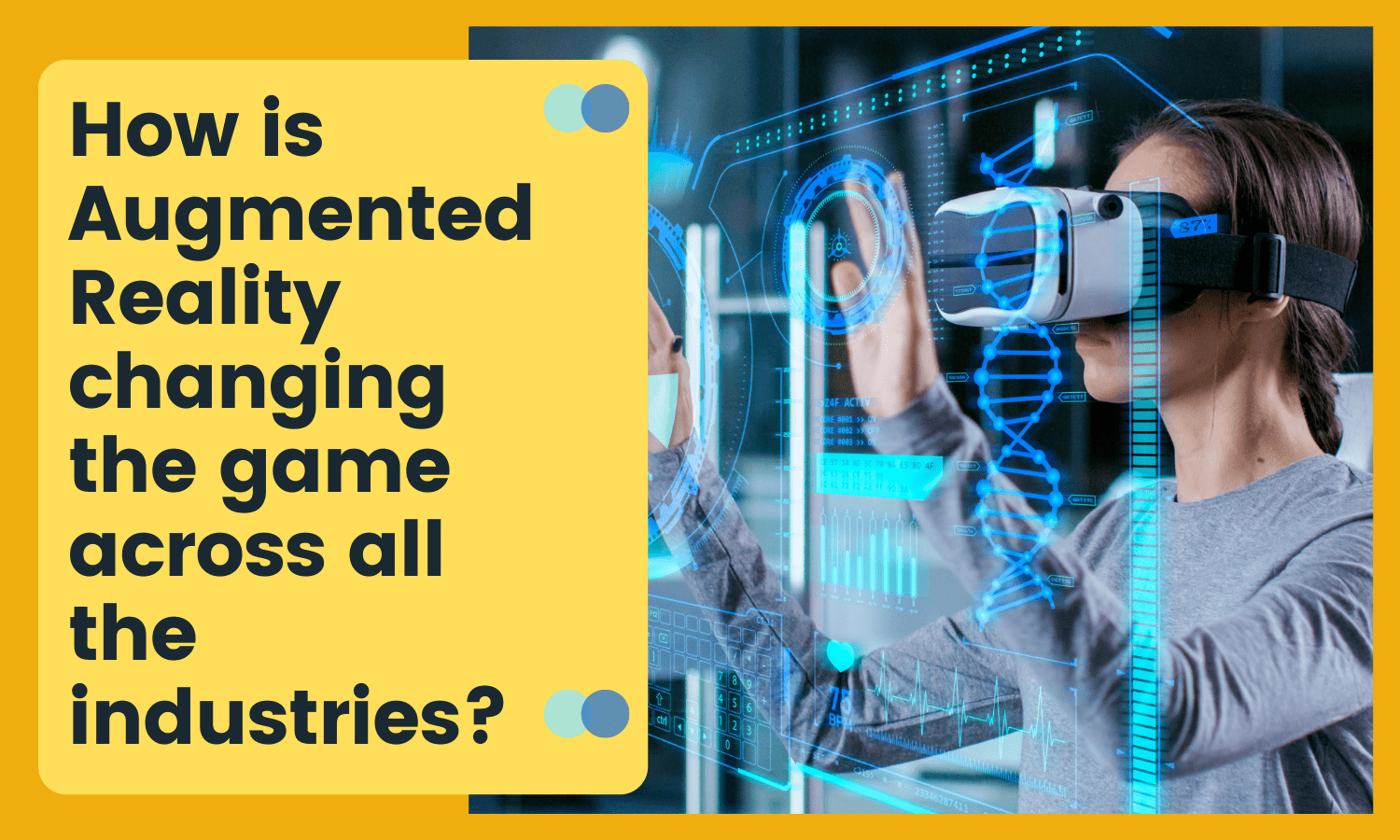 There is no respite for technological progress across industries. In recent years, augmented reality (AR) has brought many value additions to several industries. Augmented Reality (AR) played a crucial role in training and skill development across many industries. With the inclusion of AR technology, skill training has been completely revamped, bringing in different perspectives.

AR is slowly changing the game plan for many industries corresponding to professionals’ training and skill development. Let us now explain the benefits of augmented reality in professional training.

What exactly is Augmented Reality (AR)?

AR refers to the computer-generated attributes of reality that organically enhances the perception of lived reality. AR incorporates various characteristics of the reality around us and transforms them to allow meaningful interactions combining digital and living reality. AR ensures interactions between the virtual world and the lived reality.

Whether in industrial environments or small digitized workspaces, AR can play a significant role in improving the understanding, practical knowledge and on-job skills of new trainees and seasoned and established staff. Now developing innovative Augmented Reality apps for training has become a significant trend.

With the introduction of AR into training, employee engagement can get a boost, awareness corresponding to security and safety can be enhanced, costs for training and skill development can be minimized, and learning curves can be managed better.

Enhanced engagement: In all the things where training is all about learning by doing, AR plays a crucial role. Thanks to AR, there is significant scope of having hands-on training in a highly interactive and structured manner. Naturally, AR ensures optimum engagement in any training and skill development programs.

Safety from risks: There are many job scenarios with excellent exposure to physical risks and safety concerns. With AR-based training in such dangerous scenarios, complete safety can be guaranteed while still providing full exposure to the actual danger through digital platforms.

Reducing Cognitive Obstacles: In all job training and rigorous learning programs where learning curves are higher, AR can quickly impart hands-on skills by reducing cognitive obstacles. AR, just by incorporating the real-world scenarios within the scope of skill development, can make things easier for the trainees to learn fast.

Now, let us explain how AR is transforming training and skill development across leading industries.

In sports and games training, the popularity of AR is rapidly increasing. Just like other rigorous industries and skill-based niches such as defence, riot and fire fighting, healthcare and manufacturing, in the sports sector also Augmented Reality has already played the role of a game-changer.

There are many challenging sports where maintaining precision and dealing with unpredictable moves become crucial challenges for success. For both, AR training can play a great role. We already face frequent instances of AR-powered sports visuals when on television the live football game is analysed by using interactive screen overlays, and on-screen markers are used for describing moves and players.

The same computer-generated graphics while analysing live games is used to give footballers a better understanding of the game strategy, faults and the scopes of improvements. No wonder most football managers equipped with a tablet often give instructions to players for in-match moves, positioning, spacing and in-field activities.

In complex game scenarios where very precise and well-articulated moves are required on the part of players, AR sports training can help detect even the minutest differences, measurements and precise figures that players need to achieve to beat the competitors.

In athletics training, real-time AR-enabled graphic presentations help players to have a clear understanding of different aspects such as timing, speed, distances and precision. A tennis player with real-time graphic analysis of his serves and on-court moves can get a lot of help to close the skill gap for better performance.

In a highly competitive niche like sports where even small differences in precision, accuracy, skills, aptitude, speed and stamina can make huge differences, players continuously need to remain informed about their performance and output through as many graphic details as possible. This is where AR-powered visual graphics and AR-powered visual analysis can play a significant role.

Education is getting hi-tech thanks to the handheld devices that swept classrooms and learning environments across all age groups. Augmented Reality (AR) has brought several era-defining changes to modern education. Augmented reality (AR) is facilitating real-world interactions through the use of text, audiovisual effects, graphics, and multimedia. For learners AR is pushing the barrier for hands-on training and knowledge gathering through interactive means.

Since the good old smartphones of students are now pretty equipped to work as AR hardware, incorporating AR based Edtech solutions has become easier than ever before. In contrast to Virtual Reality (VR) headsets that still seem to be quite expensive AR has a lot to offer for the learners.

For outdoor learners in the field of botany and geology, AR based interactions with real life objects on the screen opened the door for immersive learning. Learners can just take images of natural objects from the environment and can instantly reveal the layers of information on their screen.

Similarly, anatomy lessons for would-be artists and medical students can now incorporate real time graphic data and layers of information when the students work on models or actual skeletons. In all learning environments where hands-on training and knowledge about real-world phenomena is important, AR can play an impressive role.

In the manufacturing sector, shaping a design into reality and transforming the theoretically aligned materials into actual useful products remain a big challenge. Aligning the design and conception with real-world objects and skills is what every manufacturer strives to achieve. This is why AR in the manufacturing industry gained so much popularity. AR is not only being used in actual manufacturing tasks but also for enhancing the skills of experts in manufacturing facilities around the world.

The AR goggles and headsets during on-job training in an automobile manufacturing facility can provide step-by-step instructions in real-time and allow them to have hands-on learning on how various components can be put together and aligned.  Such AR training interfaces can also make use of voice instructions, chatbot interactions, graphic descriptions and small video clips while instructing the staff on the production floor. AR glasses used in many manufacturing facilities also allow sharing ideas and having conversations with others in real-time.

BMW, as the leading car manufacturer brand, has already incorporated AR in their assembly lines and on-job training for engine assembly. Honeywell, on the other hand, stepped into a collaborative venture with Microsoft and is on the way to create a mixed reality program that trainees across manufacturing industries can avail themselves of.

The training and skill development across manufacturing plants and facilities are increasingly leaning on immersive technologies such as AR. Apart from ensuring high engagement with precision-driven hands-on training, AR is also guaranteeing reduced errors from apprentices and new on-job trainees and keeping the productivity level high in spite of their trainee status.

AR Training in the healthcare industry

If one major industry we need to name to become the biggest beneficiary of AR training and skill development, it is the healthcare industry. From getting real-time visuals of organs during operating procedures to AR-based nursing training right on the smartphone screen, in more ways than one, AR is adding value to healthcare training.

In the operating theatres, leveraging AR interfaces to get a more detailed view of the operating procedures and the actual condition of organs can help medical students learn the intricacies of surgery faster. In all medical colleges where undergraduate medical students sharpen their skills through exposure to actual treatment and operating procedures, AR-based medical training can play a very valuable role.

Another AR experiment that is gaining momentum in the medical field is the use of Medical Twins. Since medical devices are tremendously expensive and involve maintenance and upkeep challenges, many hospitals and clinical establishments these days started to come up with AR-based digital twins of popular equipment and gadgets that can be accessed and operated directly through computers or mobile apps. In medical training sessions, these AR-based twins can be used to educate medical students and trainees.

There is too much to say about the era-defining role of AR in professional training and skill development across multiple industries. The above-mentioned examples and case studies clearly show the potential of Augmented Reality in allowing learners and professional trainees to learn faster and better.

Bio: Tuhin Bhatt is one of the co-founders of Intelivita, a renowned mobile app development company with offices in USA, Canada and India. He usually writes on cutting-edge technologies, future-ready development practices, eye-opening leadership principles, and trending entrepreneurial skills. Connect with Tuhin at Linkedin & Twitter.

How and Why Are Infographics Effective in the Classroom?