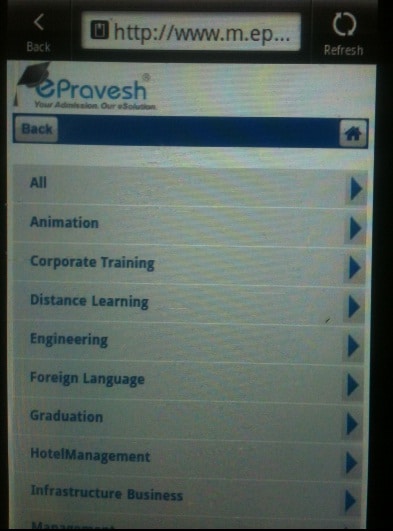 ePravesh.com, a Leading eCommerce platform for Online Admissions, Educational Courses has come up with its beta version of the Mobile Site m.ePravesh.com. Now Students,parents can view all the course details, institute details from their mobile phones.

“Smart Phone usage  in India is increasing with reducing costs of the smart phones and increased age group of student population 15 to 25 yrs old. More number of people are using internet through their mobile phones rather that from the  desktop. This has prompted us to launch mobile version of the web site to serve our customers in better way“, Said Samir Kamat (CEO of ePravesh.com).

ePravesh.com had launched its Android Application earlier this year and had received positive response from education community. Since its inception and launch ePravesh.com has been helping students, parents, educational institutes to simplify overall admission process and has resulted in significant saving for institutes along with students. ePravesh.com has received positive testimonials of the end users. ePravesh is truly emerging as one of the end to end eCommerce platform in the Education sector to fulfill various needs of the students related to online admissions, training courses etc. ePravesh has also won national level award from PC Quest India’s TOP Software project (ISTP) 2012, ET Power Of Ideas (October 2010) , Hottest eCommerce Startup award (December 2012) in the last 2 year period.

Mobile Site of ePravesh.com has many exciting  features including viewing institutes based on classifications of School, College, Training Courses, Professional Workshops along with Courses offered by each institute , Course Fee Structure , Deadline to Apply for the Course etc. Student can also send enquiry for specific course to get details over email.

In the coming  quarters , m.ePravesh.com Mobile site is going to have many more exciting features which will simplify life of the students,parents related to admission process.

ePravesh®, a product of Splashgain Technology Solutions Pvt Ltd, is an education based service platform developed for the educational institutions across India to manage online pre-admission aligned processes. It has many built in functionality which are useful for the students and educational institutes. The various levels of services include selecting institute, application for admission, form & documents submission & the subsequent communication,Online Form Fee payments.

ePravesh.com has been selected as India’s TOP Software Project for the year 2012 by PC Quest. YourStory.in has recognised efforts of Splashgain

Technologies in the field of ecommerce in education and has awarded as the ‘Hottest ecommerce startup of the year 2011’. ePravesh® also won award as one of the Top 35 best innovative ventures out of the total 17000 nationwide B plans received for ‘ET Power of ideas’ during November 2010 period. ePravesh® has been nominated as the finalist for the Bloomberg UTV most coveted CXO awards (December 2011). As a finalist, their efforts have been recognised under the category “An Entrepreneur’s IT initiative that has improved the Quality of Life”