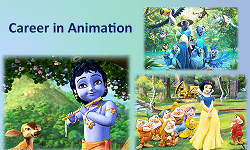 Art lovers must be remembering the year 2002 when at the 74th Academy Award function Shrek won the award in the Best Animation Feature Film category. Until then there were very few such films for consideration. Though Snow White and the Seven Dwarves was the animation film, it had received the Special Achievement Award back in 1938. Animation as an art is comparatively new and for most of its history Walt Disney Pictures was the sole player. Then in mid 1990s two more players –Pixer Animation Studios and Dream Works came into scene. They produced some popular movies like Toy Story, Chicken Run and Shrek.

Animation is basically an art form which has turned into an industry since last decade or a so. With constant developments and innovations in the technology, it is one of the fastest growing industries in the world today. According to a market research report the size of the global animation industry was USD 222 billion in 2013and it grew to USD 242.92 in 2016.No doubt, the same trend will continue in the future because animation industry is experiencing a great boom with increase of satellite channels and internet. Most segments of the animation market are growing at an increasing rate year over year.

India too is emerging as a growing market for last few years. So the demand for animators in India is growing as well. In response, several courses have been introduced in the animation market and animation institutes are being opened up across India.

Animation industry has undergone a phenomenal change in the last couple of years. Unlike past, animated movies are now being made with the state of the art technology and several special effects is a great value addition. A team of animators is employed and a big sum of money is spent on the production of the movies. Earlier animated movies were meant just for children but today entire family enjoys such an entertainment.  We all know the latest animated movie-Avatar-which received tremendous response at the box office.

Earlier animation industry was using 2 Dimensional images. Now it has turned to the 3 Dimensional.  3D animation software which is appreciated world- wide is one of the most recent and radical trends in animation industry. With 3D images animated characters become live and audience can easily connect with them. India has also produced 3D version movies like Hanuman or Bal Ganesh which were well received by Indian movie lovers. The success of animated movies in India has propelled the development of some new advanced animation software.

Of course animation industry is not just limited to movies. Other media like television soaps, news-papers, magazines, advertisement agencies, websites, and video games also offer ample employment opportunities. Video game industry which uses 3D technology is one of the most prospering markets in India. It is important to note that today game industry is thrice the size of Hollywood Industry.  Therefore, people with a keen interest and deep knowledge of 3D animation technology can make a promising career in this domain.

Variety of courses like Visual Principles and Syntactic, Animation Scripting and Technique, Photo Communication, Special Effects, Computers for Animation, Animation Engineering,and System Management etc. are available today. No doubt, animation industry is attracting youngsters in increasing number who are choosing this domain as a profession.

Why More Students are Opting for BBA-IB (International Business)?

Courses and Options for HSC Students of Commerce Stream

5 must have features in Learning Management System