Why NIRF Rankings are crucial for education institutes 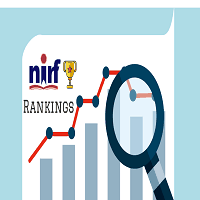 Education institutes offering various courses need to attract students for enrollment. NIRF ranking is one of the key decision criteria for taking admission in the institute.

The importance of a national ranking system is that it helps students choose the best university. A national ranking ensures that all higher educational institutes strive hard to improve their rankings.

It also ensures that there is no complacency in the institutes and they work harder each year to provide quality education to students.

“Ranking does not confer privilege or give power, it imposes responsibility”

Educationists have always voiced their concern about the absence of Indian universities, technology and management institutes from global rankings and the importance of these rankings.

Thus, a national ranking framework ensures that universities keep working hard to ensure that they are providing scholastic education, at par with international standards.

The National Institute Ranking Framework was accepted by the Ministry of Human Resource Development, Government of India on 29th September 2015.

MHRD constituted a one-day workshop on 21 August 2014 on advancing strategies for the ranking of institutions of higher education in India. The gathering set out to establish a Committee for developing a National Ranking Framework.

Later it was additionally chosen to co-opt representatives of focal central universities and IIMs likewise into the proposed committee. In view of these choices, a core committee comprising of 16 individuals was established on 29 October 2014.

The secretary (HE, MHRD, as administrator and extra secretary (TE), MHRD, was appointed as the member secretary. Other members were the chiefs of the IIT’s at Kharagpur and Madras, vice chancellors of Delhi University, EFL University, Central University of Gujarat and JNU, directors of the IIM’s at Ahmedabad and Bangalore, Directors of school of planning and architecture (Delhi), NIT (Warangal), ABV-Indian Institute of Information Technology and Management (Gwalior), IISER (Bhopal), NAAC (Bangalore) and director of NBA (New Delhi).

Propose a National Framework for execution estimation and ranking of

Recommend the organizational structure, institutional mechanism and processes for implementation along with timelines of the National Ranking Framework.

1. Recommend an instrument for the financing of the Scheme on National Ranking Framework.

The core committee recognized a lot of quantifiable parameters to be utilized as measurements for ranking the institutions. These parameters were gathered into five major headings.

The committee recommended the weightages to be allocated to different groups of parameters in the case of institutions of engineering education and left the task of carrying out similar exercises for institutions of other disciplines to other competent agencies.

The first draft of the report was set up by Surendra Prasad, Chairman, National Board of Accreditation and Member of the core committee.

The University Grants Commission established a special committee on 9 October 2015 to build up a structure for the ranking of colleges and schools in India and the system created by this committee has been consolidated into NIRF.

Here are some of the proposals of the core committee:

1. The metrics for ranking of engineering institutions ought to be founded on the parameters settled upon by the core committee.

2. The parameters have been sorted out into five expansive headings and each heading has been partitioned into reasonable sub-heading. Each heading has a general weight relegated to it.

3. An appropriate metric has been proposed which registers a score under each sub-head. The sub-head scores are then added to acquire scores for every individual head. The general score is figured dependent on the loads apportioned to each head. The overall score can take a maximum value of 100.

4. The committee suggested the grouping of institutions into two classes:

ii) Class B institutions: These are institutions partnered to a University and do not enjoy full economic independence.

This is an umbrella framework that constitutes a methodology to rank higher education institutes across the country. It ranks institutes based on five parameters.

These parameters have a certain weight. There are also a few sub-parameters.

What exactly are these parameters?

These parameters have the following marks and weightages:

This parameter deals with the basic activities related to any place of learning. It deals with the teaching and learning resources available to the institute and how they are being utilized.

It is calculated based on the total number of students, enrolled in all programmes, and the number of permanent/regular faculty in the institute.

The optimum expected ratio is 1:10 ( 1 teacher for every 10 students) to get maximum marks. For ratios lesser than 1:50, FSR will be set to zero.

This subparameter has been assigned 30 marks.

This is calculated based on the percentage of faculty with a PhD or an equivalent degree over the past three years and the years of experience they have.

This subparameter has been assigned 20 marks.

This metric is calculated based on the addition of

(c)operational/recurring expenditure on faculty, staff salaries and maintenance of academic infrastructure (excluding maintenance of hostels and allied areas of services)

(d) a percentile function to be decided upon by the NIRF.

It has been assigned 30 marks.

This parameter measures the quality of research being carried out, and the scholarships provided to students.

The following are the sub-parameters based on which RP is calculated:

(i) Combined metric for Publications (PU)

This is calculated based on the total number of publications reported in Web of Science, Scopus, PUBMED, Indian Citation Index, etc. divided by the nominal number faculty calculated on the basis FSR.

It has been assigned 30 marks.

It has been assigned 40 marks.

This parameter judges the ultimate goal of students, graduation.

It is calculated based on the following subparameters:

(i) Combined Metric for Placement, Higher Studies, and Entrepreneurship (GPHE)

It has been assigned 40 marks.

This is the number of students as a fraction of the approved intake who have passed the university exam within the stipulated time for the course they had enrolled in.

It is the median salary of graduates who have passed from the institution.

It has been assigned 20 marks.

It is the average number of PhD students who have graduated over the past three years.

It has been assigned 10 marks.

This is the parameter that deals with the representation of women, marginalized and minorities in the institution.

Following sub-parameters are included in this heading:

(i) Per cent Students from other states/ countries (Region Diversity RD)

It is the addition of the percentage of women student and women faculty and the number of women in senior administrative divisions like Head of Department, Dean, Institute Head.

The institute will score full marks if it provides all facilities for physically challenged students.

It has been assigned 20 marks.

This parameter judges the overall perception of the institute by industry, peers and researchers. It is judged based on the following sub-parameters:

This is calculated based on a survey of the industry and organisations, official funding agencies, private sector, etc.  and it should be updated periodically.

PRACD is calculated by a survey conducted over a large category of academics, it should be updated periodically.

It is based upon the public reception of the institute. It ascertains the public’s trust in the Institute for their children and friends.

It is assigned 25 marks.

It is the number of PG and PhD students enrolled in the previous year.

Why is this ranking important?

Now that we have seen how the NIRF ranking is calculated. Let’s now understand why this ranking is important.

When students research about colleges and universities, one parameter that they pay the most attention to is the ranking of the institute. Choosing the right educational institute is one of the most important and daunting tasks in a student’s life. A higher ranking ensures that students and their parents/guardians can place their trust in your institute.

As we have seen in the parameters, campus placement plays a significant role in the ranking of institutes. Similarly, the rank of the institute plays a crucial role in attracting companies and organisations to campus placements.  A good rank means that the students from your institute receive well-rounded education, and are up to date with market trends. Thus, it makes them desirable employees, and brings more companies to your institute.

A better ranking gives you a better reputation by evaluating your institute better than the others and it is also proof that the general public likes and trusts the institute. A ranking is a testimonial that your institute has worked on every parameter and provided the best resources, infrastructure and facilities to the students.

This can be used as a brand building activity. A better rank improves your brand perception and puts you in the spotlight and among the pioneers. Students are more attracted to institutes which have established themselves as creme de la creme.

The advantages of improving your brand perception is that you get the added advantage of word of mouth advertising. It means that the general public views your institute in high regard and talk about it in the same manner. Thus, more people get to know and discuss about your institute, without any expenditure on advertising and marketing. It is also the most widespread and fast means of publicity.

Hence, a good NIRF ranking has multiple advantages for your institute. It is in your best interest that you strive for a better rank everytime and establish your institute in the top echelons of higher education.

Do not ignore those 6 things while advertising institute courses

Can Universities Keep Up with the Digital Age?