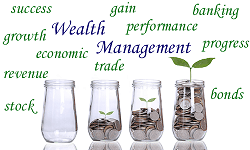 You must be remembering an old proverb – “Penny saved is penny earned.” It was no doubt, an advice for creating wealth, by saving. Once upon a time, creation of wealth was only a dream for Indian middle class. It was hard for most of the middle class families to put both the ends together. Of course the major thrust was on saving money that too for any emergency that may arise and there were only few elites who could preserve and create wealth. There were some foreign banks that used to provide wealth management services to these few fortunate people.

However since last couple of decades the situation is changed. With a major boom in economy, sky-high salaries in MNCs and other corporates and sock and real estate prices rising, this period has witnessed an unprecedented prosperity in middle class in India. Even statistical data confirms this fact. According to the World Wealth Report 2005, published by Cape Gemini & Merrill Lynch, “the number of high net worth individuals (HNWIs) in India grew by 14.6 percent, twice the global average of 7.3 percent, in 2004. Future growth in this segment was forecast at almost 20 percent annually during the next five years.” This forecast proved to be right because World Wealth Report 2016 shows that “with US$17.4 trillion in HNWI wealth, Asia-Pacific surpassed North America for the first time to become the region with the largest amount of both HNWI wealth and population globally.” It further states that “by 2025, world wealth is poised to reach USD$100 trillion primarily propelled by the Asia-Pacific region. From 2006 to 2015, Asia-Pacific doubled its HNWI population and wealth.”This has created a huge demand for wealth management services in India and other countries in this region.

Wealth management basically deals with preservation and creation of wealth. Contemporary wealth managers provide all encompassing financial services. These include normally investment under assets such as equity, mutual funds, debt, insurance, and specialized services such as estate management, tax advisory, succession planning etc. As demand for qualified wealth management professionals has outgrown the supply, there is unlimited scope for professional advancement in this field. Wealth managers have ample choice today. There are front office jobs that include services like advisory, sales, research and analysis, source funds, security management, and strategic partnership; middle office jobs consist of risk identification and risk mitigation techniques; and back office jobs deal with operations and infrastructure, including software and network support.

The wealth managers with a degree of a reputed institute today can get promising jobs.No doubt, the young professionals, who are aspiring for a career in wealth management, have very bright future.

Want to become professional in Securities Market ? Here is a good option for you.